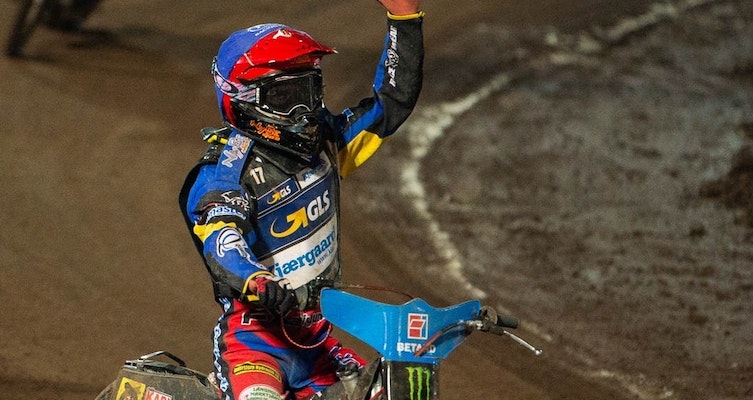 The last weekend in Polish league speedway saw Ostrovia promoted to the top division, Ekstraliga, whilst German team, AC Landshut will be competing in Polish League 1 in 2022. Both teams may have lost away from home today, 49:40, but outstanding wins at home last week meant that both the visiting teams will be racing in the next division up in the coming season.

As always, it was the 2 League which was played first this Sunday.

Opole brought in Mateusz Tonder from Zielona Gora and Czestochowa junior Matuesz Swidnicki for the crucial home match where they were looking to overturn a 52:38 drubbing in Germany last week. But both Polish riders only scored 6 pts, not nearly enough to make a significant impact and dethrone Landshut. Instead was Swidnicki's rival in the U21 World Championships, Danish Silver medalist, Mads Hansen who top scored for the losing side with 10 pts. Swede, Jacob Thorssell took 7+1 for the home side.

For the visitors it was again the trio of Martin Smolinski (13), Dimtri Berge (10+2) and Kai Huckenbeck (7+1) who lead the team in points scoring. And whilst it was not enough to actually win the tie, that didn't matter as the German team won the Polish 2 League for the first time in their history.

Ostrovia travelled to Krosno with the odds stacked in their favour having won by an enormous 30 points last week at home. And the visitors finished off the job they started by refusing to let the home side take the lead until Heat 11, by which time Ostrovia had already secured promotion.

The Wolves top riders did their bit to chase the match with Andrzej Lebedevs top scoring for the home side with 13+2 from six rides. But their four other riders all failed to score above 6 points making it impossible to make a dent in the 30 point deficit.

For the visiting side, Oliver Berntzon (pictured) and Tomas Gapinski ensured promotion top scoring with 9+1 each. And, just like Landshut ealier today, they lost this actual match, but that did not stop their being wild celebrations when the visitors realised they will be racing in the world's best speedway league in 2022.