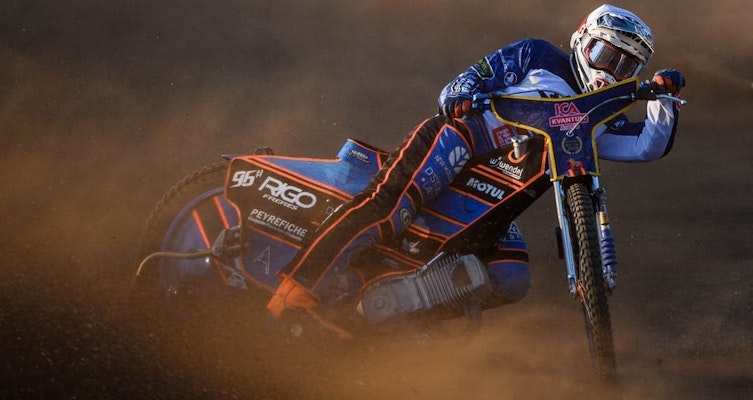 At the beginning of the season AC Landshut would, at best, be considered as outsiders for winning Poland’s third tier. But now, after a demolition of Opole in Germany, the side as are just 39 points from an amazing upset.

The German side has been strong at home this season and
whilst Kai Huckenbeck (9+1) and Martin Smolinski (11+4) played their part , it was Frenchman, Dimitri Berge (pictured) who led Landshut to victory with 14.

For the stunned visitors bringing in Matuesz Tonder from Zielona Góra did not have the desired effect as he scored just 3 pts and it was again Swede, Jacob Thorssell who top scored with 9 pts.

It will now take an exceptional performance at home next week from Opole if the Polish side are to win. It’s possible, but at the moment it is the Germans who have one hand on the Polish league 2 trophy.

When the two teams that finished top in the regular season met in the final 1 today, no one could have predicted that the home side, Ostrow, would attempt to gain promotion even before the second leg has started!

The Wilki Krosno dream of going straight from League 2 to the Ekstraliga in just one season looks in tatters as even the league’s second best scorer, Tobiasz Musielak struggled with just 6+1 for the guests.

Ostrovia, on the otherhand, made full use of their home advantage with the international trio of Tomas Gapinski (14), Patrick Hansen (12+1) and Oliver Berntzon (11+2) all scoring double points as they routed the Wolves, 60:30.

As in today's eWinner 2 match, it seems almost impossible that today's visitors will be able to turn this fixture around next week. So, it seems like Ostrovia have one foot in the top division for 2022.