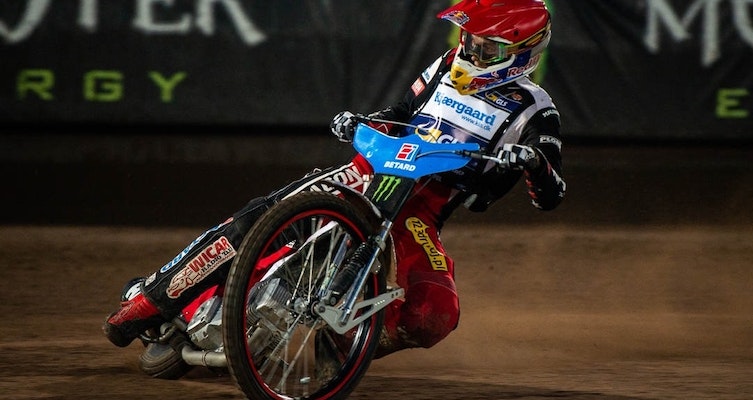 Last night saw both home teams take narrow wins in semifinal 1 in Sweden's Elitserien. Now, just one day later, all four teams were in action in the deciding semifinal 2.

In a wet and floodlight Målilla, Dackarna took a 47:43 lead into tonight's match in Västervik.

And the visitors ensured that Västervik fans would have nothing to cheer about as they won four heat advantages in the first seven heats to give the Målilla side a 10 point lead on the night with just 8 heats completed.

Västervik's top three all put in excellent performances with Fredrik Lindgren and Bartosz Smektala both scoring 12 pts. But, unfortunately for the Baltic coast team, Pawel Przedpelski (2+1) and Vadim Tarenesko (3) did not get into the match at all at #2 and #4.

For the visitors their SGP trio finally delivered, included Maciej Janowski (11, pictured) who struggled in the rain yesterday. They were ably backed up by Rasmus Jensen. The Dane scored 9 pts at #4 for Dackarna who won 41:49 to gain a place in the 2021 final.

But by Heat 6 Eskilstuna Smederna had gained two 5:1s both through a partnership between Michael Jepsen Jensen (7+2) and Kacper Woryna (11+1). That put the home side in the lead by 10 points on the night and 8 points on aggregate.

And whilst Rospiggarna's top rider, Patryk Dudek took 14 pts from six rides, Smederna did not faulter. They took two 3:3s in the final two nomination heats ensuring that they will be returning to the final again in 2021.

That sets up a repeat of the 2019 final, which Eskilstuna Smederna won to take their third straight title in a row which will also take place on Tuesday and Wednesday of next week.