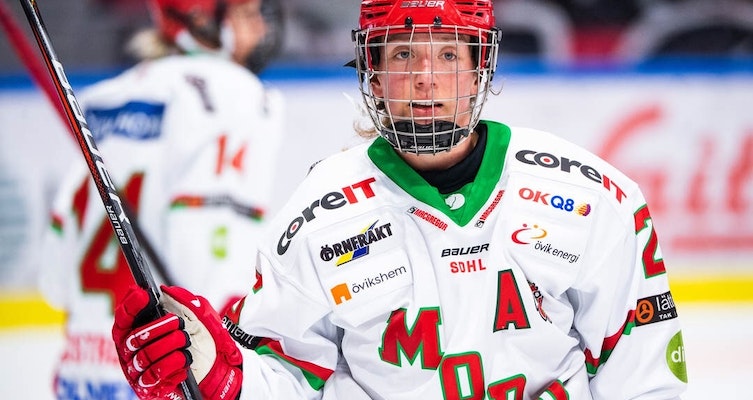 A year ago MODO Hockey were second in the league and went out in the playoffs in the semifinals to Linköping HC. But this year they were second from bottom meaning that the only playoff hockey they were involved with was the best of three qualification series with Division 1's Skellefteå AIK.

The clubs would be considered local rivals, both based in the northern part of Sweden. But the Division 1 club were never in with a chance with the difference between the two leagues again being underlined. Skellefteå is a young team with just two import players from Slovakia. MODO on the other hand have the Czech national goalkeeper, Klara Peslarova, French team captain and former Toronto Furies player, Marion Allemoz (pictured) and well as Swedish internationals, Olivia Carlsson and Mina Waxin on their squad.

And it was assistant captain Allemoz that opened up the scoring for MODO in the first away match in Skellefteå on Wednesday. Peslarova gained a shutout and Waxin finished off their rivals in a 0-4 victory.

In the second game in Örnsköldsvik, Allemoz again opened the scoring for MODO. The visitors were taken apart in a second period, which the home team won 4-0 and wound up taking the game 7-0 and with that the series.

That means MODO Hockey will again being playing in the top flight, the SDHL, in 2020/21.

The team's top scorer in the regular season, Allemoz, finished with 4 points (1G+1A in both matches), the same score as international teammate, Lore Baudrit (1G+3A). But it was American import Gracen Hirshey who topped the team in this series with 5 points (3G+2A).

The team has struggled this year without top players, Michela Cava (now at Brynäs IF) and Kaitlyn Tougas (HV71) and will need to bring in a number of stronger signings to avoid being in the bottom half of the table next year too.

This is the third year in a row Gothenburg HC have been involved in the SDHL qualification matches. However, despite that experience they decided to take the long route, needing all three games to defeat the spirited opposition in the form of Malmö Redhawks, whose team reflects the city's closeness to Denmark. They have four Danish internationals, including the country's netminder, Lisa Sellberg Jensen, who were in the team who won the Division 1A World Championships last year, replacing Sweden in the top division of Swedish women's hockey for 2020.

Nearly 500 people turned out to see the Redhawks at home on Wednesday. But at just 3:26 in the first period they saw their team go behind 0-1 to a goal by Gothenburg's 17 year old Swede, Elin Svensson. But a goal by Malmö's top scorer, and Danish international, Marlene Frandsen brought the scores level, until Svensson struck again with 12:12 left in the third to seal an 1-2 away win for Gothenburg.

That gave the SDHL team two home matches to beat the team from Skåne. But if anyone thought that Malmö would just lie down, they were sorely mistaken. When Frandsen scored again at the beginning of the third period during Saturday's match in Gothenburg, it was the third goal unanswered goal in a row from the visitors as they took a commanding 1-3 lead. When former Danish international, Julie Jensen, netted the empty net goal, it sealed a famous 2-4 victory for Malmö and set up a winner-takes-all decider in Gothenburg on Sunday.

With tension in the air, Gothenburg played most of the first 8 minutes of the match with someone in the box, including a bust up between the home team's Canadian defender, Celine Tardif and the visitors' Swedish forward, Amanda Andersson, which saw them both serve a 2 minute minor for Roughing.

However, it was the 17 year old Svensson who was first to find the net again and with that the Gothenburg team began to take over the game. It was two North American defenders on the team who found the back of the net - first Canadian import, Samantha Fieseler and then American/ Canadian Emma Keenan who stretch the lead to 3-0 for the home team with 12:37 to go in the final period. That, plus a later goal from another 17 year Sweden on the west coast team, Hanna Thuvik, and the result was clear.

Gothenburg HC win the series 2-1 and remain in the top division with MODO Hockey for the 2020/21 season.