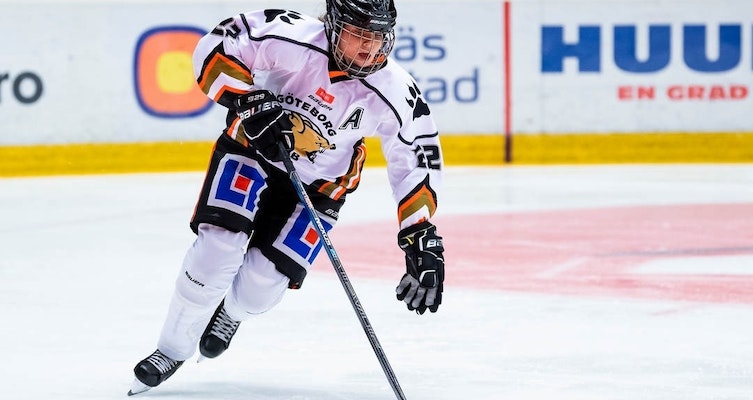 SDHL: Interview Hanna Thuvik (GHC) - the results can be seen on the ice

Hanna Thuvik is only 17 years old, but is already in her second full season at senior level in the SDHL with Gothenburg HC. Not only that, but this year she is the team’s top scoring Swede with the same points as imports Louisa Durnell and Emma Keenan, all with 17 points (9G+8A).

Whilst majoring on the SDHL, she has also played a few games with Division 1, Trollhättans HC. So, I ask Thuvik what’s the difference between the top two leagues, “it’s the speed”, she says analytically, “both in the skating and puck tempo”.

It will come as no surprise that she has represented her country at the recent U18 World Championships in Japan in January. Sweden came in fifth, but for Thuvik it was about the whole experience, “it was lots of fun,” she says with a smile, “it is great to play against the best in the world in your age group and measure yourself against them”. She rightly has a long-term goal to get a place in the senior team.

Back in Gothenburg HC, I get her to reflect on her development as a player this season, “personally, I think this season has gone quite well for me. I have developed my skating and been much stronger on the puck. And of course, my points production has increased, which was one of my main goals this year”.

What has made the difference?

“I think I’ve have been given more responsibility by our coach, which has meant I have a better self-confidence and that can be seen in the results on the ice,” she says, showing how important the mental part of the game is, as well as technical ability. “One key area”, she adds,” is that I have been more aggressive in attacking the net”.

The club have one final challenge left this season as they go into the qualification for the SDHL against the Malmö Redhawks after coming last in the top division. The young Swede was part of the Gothenburg HC team that won the equivalent series last year. But few would doubt their ability to hold on in the SDHL where the club has their best season so far and where Thuvik would love one day win the Swedish Championships.