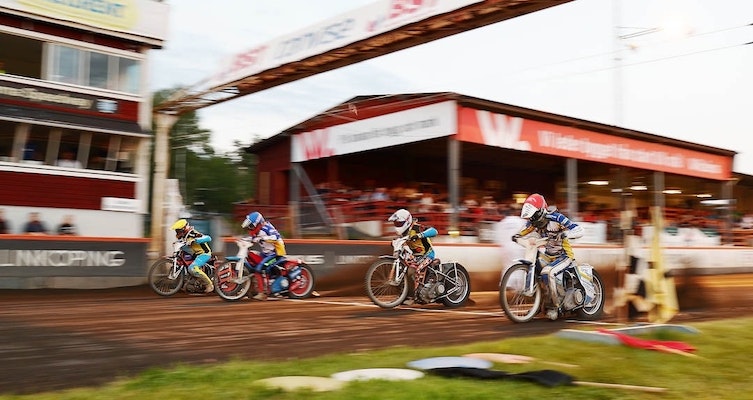 Danish rider Thomas Jörgensen is 28 years old and lives in the UK where he started racing with Scunthorpe Scorpions in 2011. Since 2018 he has been racing in the Premiership with King’s Lynn Stars and doubling up with different clubs in the Championship.

“I was not sure if there was going to be any racing in Sweden or Denmark this year,” he tells me as we shelter from the blazing Swedish sun shine, “so, I decided to sign with Scunthorpe again for 2021.”

As it turns out, the Danish Metal League has started and Jörgensen has been racing with Brovst, who have rebranded themselves as Nordjysk Elite Speedway this year. Although the team are yet to win, Jörgensen is their second highest scoring rider behind Finland’s Timo Lahti and he has a 1.810 heat average. That is the same score as Polish veteran, Piotr Protasiewicz and ahead of Danish riders such as Andreas Lyager, Michael Jepsen Jensen and Motala teammate, Jonas Seifert-Salk. “Yeah, it’s going good in Denmark right now,” he summarises.

The pandemic stopped racing in the UK and Denmark in 2020. But for Jörgensen it finally gave him a chance to race in Sweden, “I’ve been wanting to race here. The league is a good mix and you can prove yourself against the best riders from Poland and Sweden as well as Denmark,” he tells me, “But when Daniel [Davidsson] rang me, you know, with Corona, I had not really practised at all! So, I came here at two o’clock for a practice and then I was racing in the evening!” he says laughing at the memory.

So, even with Corona, every cloud can have a silver lining.

It worked out - the ambitious Dane scored 1.548, making him the team’s third highest scorer in 2020 ahead of juniors and fellow Danes, Seifert-Salk and Tim Sörensen as well as up and coming American, Broc Nicol.

But before we’re done, we get into the hot topic of tyres, “These Anlas tyres we can use in Sweden and Denmark are SO much better than the ones we are allowed to use in the UK! You know, you can gate really well in the UK, but it is all hit and miss, even if you’re riding on a brand-new edge, you just don’t know if the tyres is going to hold. It is much better to get these more expensive tyres that last, ‘cos the ones we have right now, you can’t use them after one meeting!” he says lamenting the situation in the UK.

And whilst he might not like the tyres, the 28-year-old is still putting up good numbers in the Premiership with a 1.833 average. That puts him in 20th place on the individual ranking, just 0.009 points behind three times World Champion, Jason Crump.

So look out for Jörgensen at a track near you in the UK, Denmark and Sweden in 2021.