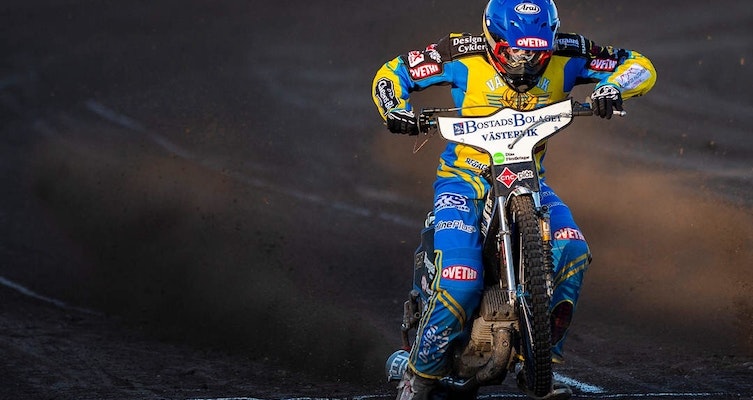 With just days to go before the Elitserien clubs must report their 2020 line up to the Swedish Motorsports Union, SVEMO, today has seen two more heavyweight signings here in Sweden.

First, up and coming German rider, Kai Huckenbeck will race his second season in Sweden, but this time with Rospiggarna.

He had a great season first year with Motala Piraterna and picked up a 1.286 heat average. The Hallstavik club were particularly impressed with his performance on their home track when Piraterna travelled to meet Rospiggarna last year. He collected 11 points that night and beat Swedish legend, Andreas "AJ" Jonsson three times during the meeting on the very same track that will host the Swedish SGP next year.

The 26 year old was also part of the Brokstedt team that won the Bundesliga in his native Germany.

On the international circuit in 2019 he participated in the Speedway of Nations final for Germany, the European Championship (SEC) as well as having the chance to race in the German SGP as a wildcard in Teterow in August.

Rospiggarna also said that they would unveil their final heat leader on Monday who will complete the line up of a very different looking club from the team that spent the majority of last season at the bottom the table.

Five One Racing suggested that Peter Kildemand (above) may return to the club he was with in 2017 as he had not re-signed with Västervik Speedway and Piraterna's manager, Daniel Davidsson, needed a quick solution to gather a team before the weekend. And today it was announced that Kildemand and Davidsson will be teammates again in 2020.

The 30 year old Dane had a difficult season in Sweden, collecting an average of 1.368, his worst total since 2012. But things were even worse in Poland's Ekstraliga for his club, Stal Gorzow. Despite being the team of world champion Bartosz Zmarzlik, they avoided relegation only by winning their play-in match against Ostrovia, from the Nice 1 League.

Kildemand had his worst ever season in Poland, with a heat average of just 0.893 and will ride for Gdansk in Poland League 2 in 2020 as a consequence. The Dane must have also been disappointed with his wildcard appearance in the SEC in Vojens where he only collected three points.

However, it was not all "doom and gloom" as he played a vital role in Team Fjelsted winning the Metal League in his native Denmark in a dramatic four team Superfinal in Slangerup.

And every cloud has a silver lining - his low average may have meant that Västervik did not want him, but it is a perfect solution for Motala, who need good riders quickly and the Dane will almost certainly improve on his 2019 performance. 2020 will also see the Dane return to the UK as he announced today that he will be joining Manchester based club, the Belle Vue Aces, in the Premiership.

Motala now have four confirmed riders - Pawel Przedpelski, Peter Kildemand, Andrzej Korpov and Henrik Bergström. But Davidsson also said that two more riders will be announced on Friday or Saturday and a final rider on Monday according to an interview with MVT newspaper. Jonas Davidsson is a dead-cert for the club and Greg Hancock cannot be discounted yet. That leaves at least one more place, but Daniel Davidsson has counted himself out of the team, saying he will only race in emergencies and instead focus on the management side of speedway racing.