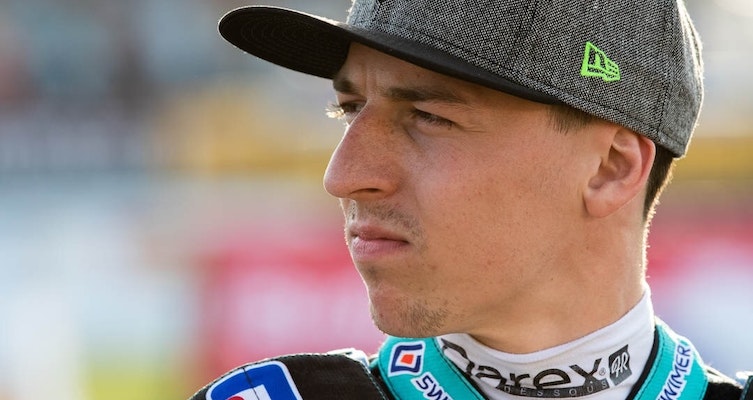 A 1:5 in Heat 9 from Toruń‘s Pawel Przedpelski (14+1, pictured) and Robert Lambert (9+1) brought the scores to within two, 28:26. The Pole would top scorer, but the visitors never got closer than that as Zielona Góra bounced bad I from last weekend’s humiliating loss to Wroclaw. Falubaz won 48:42 with top scorers, Matuesz Tonder (11) and Patryk Dudek (10+1). Australian, Max Fricke scored 7 for the home team.

The Australians in the visiting team depot also kept the scoreboard ticking over as Jack Holder scored 12+1 and older brother Chris, 5+1.

A great match took place between last year’s finalists who had already met at the beginning of the year with Gorzow providing a shock win against the reigning champions in Round 1.

The racing was tight and the teams exchanged heat advantages with the scores locked at 36:36 after Heat 12.

However, a brilliant piece of action saw the home team’s Rafal Karczmarz (3+1) pass Leszno’s U21 World Champion, Jaimon Lidsey (2+2) to take third place and separate the teams by two points going into the nomination heats.

Heat 15’s SGP line up ended up as a 4:2 to cement Gorzow’s victory 47:43 and they also took the bonus point from two victories against Unia Leszno.

Karczmarz had come in to replace Marcus Birkemose (1), who continues a luckless first season in the Ekstraliga. Meanwhile, Gorzow’s other Danish rider, Anders Thomsen faired much better with 9+1.