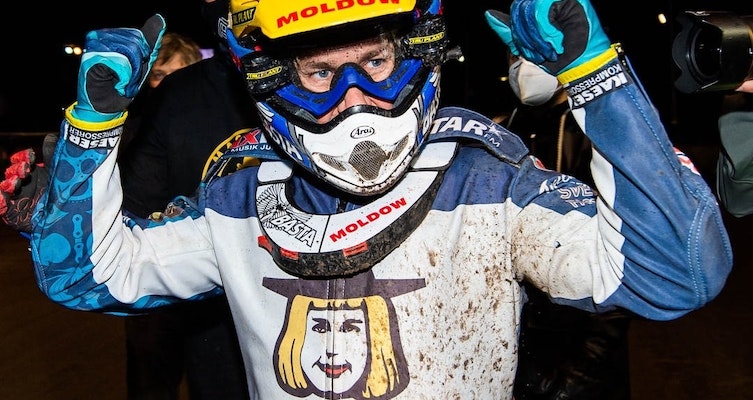 It has been two years since the last Superfinale in the Danish Metal League. But tonight, after the 2020 season was cancelled due to the Coronavirus pandemic, Holsted Tigers were crowned 2021 Metal League champions.

The four-team match featured a number of well known riders from Ekstraliga. It was Anders Thomsen's SES who were the hosts at Vojens Speedway Center and the three other teams were:

However, it became clear early on in the night that Fjelsted were not going to be picking up the trophy for a second time following their surprise success in 2019. When we had reached Heat 15, four of their five riders had failed to complete one of their heats.

Only two teams in it

That left space for the hosts, SES, and Holsted Tigers to go toe-to-toe with Nicki Pedersen's team taking an early lead in Heat 3 with the home team just slightly behind them.

And whilst onlookers might have expected that this was now just a two horse race, Michelsen's Slangerup finally sprung into life as the 2021 European Champion, Australian, Rohan Tungate (7) and Andreas Lyager (10) all won heats in the second half of the evening.

It meant that before the nominate heats there was all to play for with just six points separating the top three teams: Holsted 36, Slangerup 31, SES 30 and Fjelsted 17.

However, the Tigers needed just one of those heats to secure the 2021 Metal League Championship. That's because in the first nomination heat, Rene Bech (11) beat no less than three riders from eWinner 1 League - Nicolai Klindt (7), Tungate and Dimtri Berge (1)- to secure the victory for his side.

The final heat saw the victors' three times world champion, Nicki Pedersen, beat Ekstraliga rivals, Thomsen and Michelsen (10) making him and Thomsen the top scorers on the night with 14 pts from 6 heats.

Individual scores are available at the DMU website, but the final team scores were:

The win marks the end of a remarkable season for the 44 year old Dane. He had a good run in the Ekstraliga, finishing with a 2.029 heat average putting him in 12th place in the individual rankings. However, his team, Grudziadz, only avoided relagation in the last match of the season. Pedersen himself was banned for six months by the Danish Motor Union, meaning he would not have participated in either Grudziadz's last minute escape nor this Superfinale. It was only after his lawyers manage to suspend the case, which relates to threatening and unsportsmanlike conduct in a Metal League match, that the veteran has been able to race.

Pedersen's supreme quality has shone through and both Grudziadz and Holsted will look back at their 2021 season knowing that the three times World Champion was the game changer. The question remains open as to what the DMU and rider's lawyers will decide when they finally meet up and how much of Pedersen we will see in 2022.