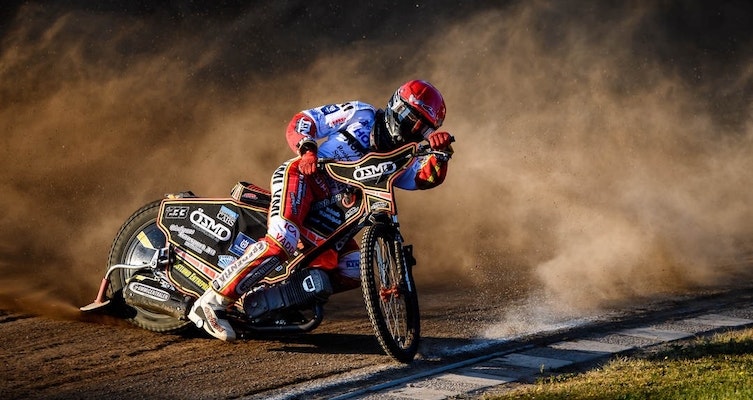 After a two year wait because the 2020 season was cancelled due to the Coronavirus outbreak, it was finally time for an Allsvenskan final again.

Tonight's hosts and defending champions from 2019 were Nyköping Griparna. They finished third in the regular season table and provided a shock win in the semis over first placed Hagfors Valsarna. That victory was gained through a brilliant first leg semi-final in Nyköping.

So, there were high expectations when they hosted Indianerna B tonight. The Kumla side got the final having finished in second place in the regular season and had won a tight semi-final against Team Rapid.

In tonight's match Griparna had the perfect start with four heat advantages in the first six heats to lead the match 24:12 and looked set to overwhelm their opposition, just as they had done two weeks ago against Valsarna.

However, in Heat 7, Indianerna were able to bring in a tactical substitution when Ludvig Lindgren replaced the struggling Christoffer Selvin (2+1). Lindgren, together with Joel Andersson (12+2), helped the visitors to win their first 1:5. (Lindgren would top score for his side with 15 points from six rides by the end of the evening).

But it was not until two further 1:5 heats on either side of the last track grading break that home fans started to be worried that they might not go to Kumla with a lead after all.

The visitors' Grudziadz rider, Norbert Krakowiak (8+1) and experienced Swede, Andersson did the damage in Heat 12. And then teammates' Hugo Lundahl (4) and Selvin repeated the feat in the following heat. That turned a 12 point deficit around to a 39:39 draw and the momentum was suddenly with the visitors.

So, when Griparna's leading rider, Kim Nilsson (pictured), crossed the finish line in first place in Heat 15, the crowd were not quite as excited as you might have expected to see the 31 year old take yet another 15 point maximum. Whereas for the visitors, they had turned a defeat around to a 45:45 draw and will go to next week's match in Kumla with the confidence that they can win the 2021 Allsvenskan.