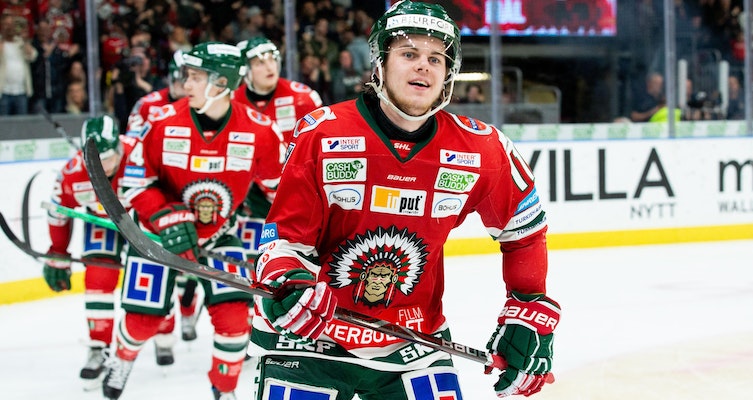 Last night in the quarterfinals of the Champions Hockey League three teams from Sweden, three from Switzerland and one a piece from Germany and the Czech Republic remained in the competition.

But by the time the full-time sirens had rung out across Europe all three Swiss teams and the Germans were no longer left, whilst Sweden’s three clubs - Frölunda Indians, Djurgården IF and Luleå Hockey - will all compete in the semifinals alongside the team from the Czech Republic.

Not that it was a foregone conclusion- in three of the games only one goal separated the teams after the first leg on 3 December so all was to play for in the return fixtures.

Djurgården IF alone had a commanding lead after the first leg with a 5-1 win in Stockholm. And they completed the job with ease winning 8-1 in total over last year’s runners up Red Bull Munich.

In the first Swiss-Sweden match up Luleå HF found their way past a spirited Lausanne HC, although the game finishing a convincing 7-3 after the second leg in Sweden.

The other match up between the two nations turned into a CHL classic. Swiss team EHC Biel-Bienne led the match at home 6-4 on aggregate with just 3:58 to go. That was due to two great third period goals from former Edmonton Oilers'Marc-Antonie Pouliot and Austrian international, Peter Schneider. The home team looking set to knockout the current champions.

But Frölunda Indians showed incredible resolve to come back from a two goal deficit, just as they did in the previous round against Farjestad BK.

They sent the game into Overtime through two 6-on-5 goals with their Chicago Blackhawks netminder, Johan Mattson pulled. The gap between the goals was just 29 seconds apart with just 2:31 of regulation left on the clock. They finished off the Swiss when Gothenburg born and bred, Patrik Carlsson, scored in Sudden Death - again with a man advantage on the Power Play. .

The Gothenburg team currently have the competition's top scorer, with undrafted American, Ryan Lasch as well as the top goalscorer remaining in the competition, Samuel Fagemo (pictured). The 2019 Los Angeles Kings drafted Swede who has netted seven times in the CHL and just one more goal will take him to the top of the goal scorers list. They will be in a semifinal that will be a re-run of the first ever CHL final in 2014/5 which was final won by Luleå HF.

Djurgarden will play against Czech team, Mountfield BK, the only non-Swedish side left in the competition. That’s after they shutout EV Zug to complete a miserable night for Swiss club hockey as all three NLA teams crashed out of the competition.

The semi finals will take place on the 7 and 14 January 2020 with Swedish teams Frölunda and Djurgården hosting the first match before the return at Luleå and Mountfield, respectively, the following week.