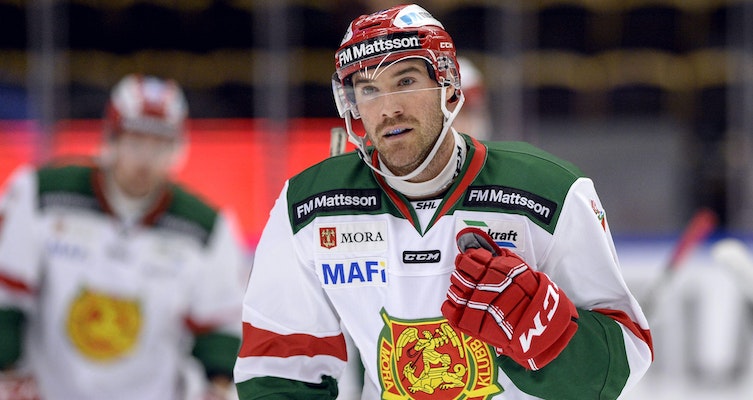 Mora IK find themselves in the same place at New Year that they finished in last season, 13th, a position they will do very well to improve on given the quality of the other teams in the SHL and the resources available to the Dalarna club. But a repeat of this month, with win four out of eight, will certainly help.

It is their North American imports who are helping in front of goal. At 5'8" ( 173 cm), this month's top scorer, 26 year old Canadian Kevin Gagne is typical of the type of player of can succeed in Europe. He has 133 games in the AHL on his CV and is now in his fourth season in Sweden, three of which have been with Mora IK. He is on course for his best points scoring season as a senior, especially if he can keep up scoring a Point Per Game as he has done in December.

Gagne and teammate Andrew Rowe (above) were on the same roster at Anaheim Ducks' AHL development team, the Norfolk Admirals in 2012/3. Interestingly, Frölunda Indians' Ryan Lasch and Max Friberg were also on this team alongside current Växjö Lakers' keeper Viktor Fasth. Like Gagne, the 33 year old American, Rowe is also on course for his best scoring season in Sweden and his 7 points (4G+3A) in December should be the confidence boost he needs as 2019 starts.

Last year, netminder Christian Engstrand was a key factor to Mora's victory over Leksand IF in the SHL qualification matches. But the club have needed another solution after as he is sidelined due to concussion after taking a puck in the head. Great scouting has brought in the 2013 Nashville Predators drafted, Finnish keeper, Janne Juvonen from Austria. At 24 he has already played four seasons in Liiga for Pelicans and could well establish himself in the SHL with the quality he has shown over the past month. This leaves the Dalarna club with the luxury of having three first choice keeper's on their roster as they battle to stay in the SHL this year.