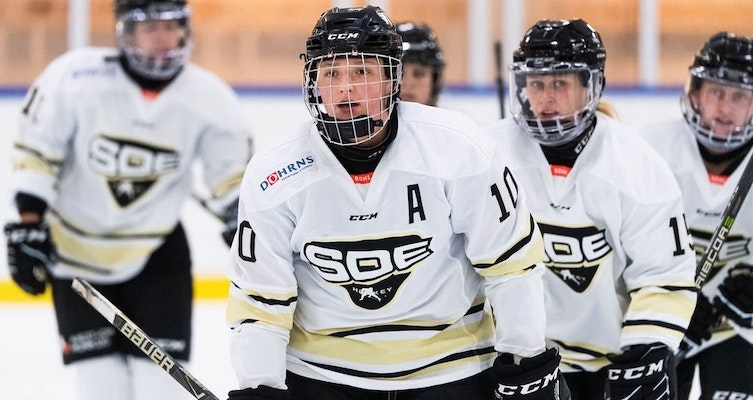 Dutch international forward, Julie Zwarthoed, has just finished her fifth season with Stockholm’s SDE Hockey in the SDHL. And for the first time the 25-year-old and her teammates have been able to participate in the playoffs rather than the qualifying matches against Division 1 rivals.

This year SDE won more games than the previous three seasons put together. And the Dutch assistant captain puts this success down to the positive team mentality that has developed over the years, “I believe SDE has a strong family feeling, a big thanks to Helene Åström our team manager, she brings everyone in with so much love and joy. We struggled a lot of seasons, but I think due to the struggle no one ever gives up. Due to this strong family bonding, I think we perform really well because we don´t give up on each other”.

Zwarthoed was again the team’s top points scorer this year with 26 points placing her in 25th on Total Points. 2019/20 saw her net 15 times, her highest goal scoring season in her career. She was just ahead of SDE and Dutch international teammate, Savine Wielenga.

“This season was great but I wouldn´t be able to score the goals without the girls that give me the passes. So, a big thank you to them,” she says modestly.

And the combination of winning games and a thriving team environment has given the 25-year-old a much-needed boost, “I had a lot of fun this season and got a lot of joy from hockey again since we were winning games. I think that having fun in hockey has helped me a lot,” she says, reflecting on the demanding work-life balance of a pro-women’s player.

With the regular season out of the way, Zwarthoed can now look forward to the World Championships in France. Last year she was part of the Netherlands team who won D1B World Championship Gold, a career highlight for the SDE forward.

Their opening match on 12 April is against none other than Sweden, who were demoted from the top tier in 2019, “The World Championships are like play offs - a lot can happen. We can beat Sweden - but that will have to be our best game ever!”, she says fully aware of the challenge that lies ahead.

However, she still thinks Sweden are favourites to return to the top, “If you see that a lot a great players play in the SDHL, it would be weird that Sweden as a country won´t be able to play in the top division”, she says reflecting on club level experience.

The 25-year-old Dutchwoman moved to Sweden partly because she could only play in men’s division in her home country. And there’s no doubt that for SDE Hockey and Julie Zwarthoed herself, it was a wise move as she and the club have grown together.

SDE finished sixth this year and were knocked out in the first round of the playoffs. But if they continue to improve the way they did in 2019/20, do not be surprised if they finish in the top half of the table next year.