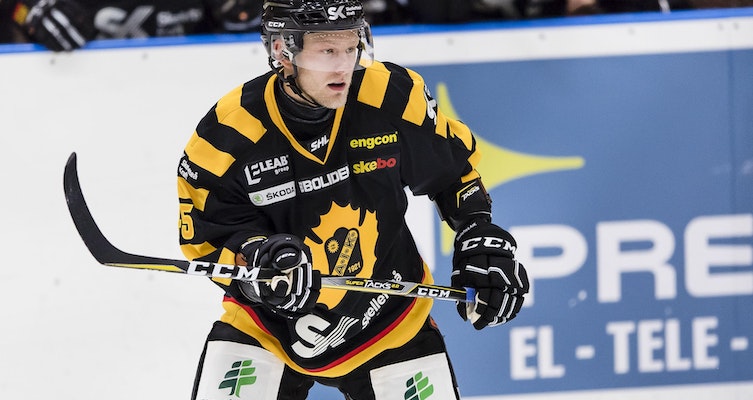 Between 2010/11 and 2017/8 Skellefteå AIK appeared in all but one of the SHL Finals winning two championships and perhaps can be considered the first successful dynasty of the SHL era.

However, look at the last three seasons and it is only one final out of three. But I think this year's roster is the strongest in the SHL and could see a final return in 2020.

One of the club's strengths which has lead to the ongoing success is there retention of good players. The club signed long term contracts with captain, Oscar Möller (30 yrs, pictured) and Joakim Lindström (35 yrs) - two of the best Swedish forwards in the SHL - and at the back Jonathan Pudas will have a key role with Emil Djuse leaving for a tryout contract in the USA.

But the stand out factor is some of the players who will be coming into the Norrbotten club.

First of the three younger players is defenseman, Philip Boberg. Only 18 this summer, he was the highest drafted Swede being picked in Round 1 by the Edmonton Oilers. He has already played in the Junior World Champions - an under 21s competition when he was only 17. He has never played in the SHL but if he can cope with the pressure from himself, the Swedish fans and the North American media this could be a breakthrough year for the youngster from Örebro.

Two forwards from the Swede's JWC team in Canada will be joining him - the 2018 Montreal Canadiens drafted, Jacob Olofsson, who has already had a season in the SHL with Timrå IF, and Rikard Hugg. Hugg is undrafted and now playing his first season in the SHL after two year's in Canada's OHL. In his last year he captained the New York Rangers linked team, Kitchener, scoring over a point per game.

The final touch in this potentially championship winning side, it the arrival of several maturer players to compliment the trio of juniors.

Skellefteå have taken in three players from arch rival Växjö Lakers. On the blue line, two home grown products will return from Småland as Arvid Lundberg (24 yrs) and Swedish international, Niclas Burström (28 yrs) come back to their northern roots. The forwards will be strength by one of Växjö's double gold winning players, the talented Finn, Toumas Kiiskinen.

If that was not enough Skellefteå has also managed to sign one of the most promising new import players of the 2019/20 season. Tom Pyatt was drafted by New York Rangers in 2005 and has played 445 matches in the NHL and comes to the first time for Sweden after 3 years with the Ottawa Senators. If the 32 year old Canadian he can adjust to the European game he could well rival Ryan Lasch for top scoring import player in the SHL.

If this the recipe to see Skellefteå lift the Le Mat Trophy for the first time since 2013/4?