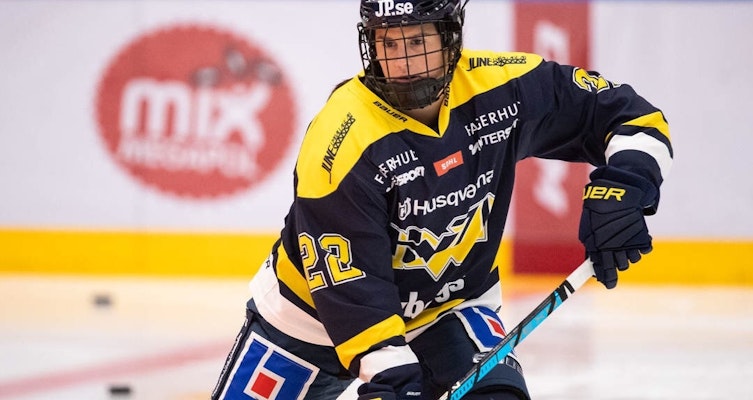 This weekend saw the end of the regular season in the SDHL in Sweden and HV71 were first with a record winning 99 points.

In 36 games they lost only 3 times, once in regulation to Brynäs IF and Djurgården IF and then once in overtime to Luleå.

The club have quite simply excelled in every area of the ice. They have the league's top scoring defender, American, Sidney Morin, who was 5th in Total Points. Three more of her teammates where in the top ten scorers in the league including Canadians Kennedy Marchment (2nd, pictured) and Kaitlyn Tougas (6th) and the league's top scoring Swede, Hanna Olsson (8th). Spanish netminder, Alba Gonzalo, was the league's top keeper when it comes to Goals Against Average, with just 1.36. They owe their success to hard work, but also buying in the best - all of the names above, apart from Gonzalo, are new to Jönköping but where top scorers in their clubs last year too.

About the only records that HV71 have not taken this year is leading Total Points and leading Goal scorer, which Brynäs IF's Swiss Olympian, Lara Stalder has taken in impressive style with 71 points (42G+29A), just one point shy of having a 2.00 points per game average.

Anything can happen in playoff hockey, but few would dare to bet against a HV71 victory in the SDHL 2019/20.

A Brit On Thin Ice was almost 100% right is guessing how this year's table would look like, with only three placing being incorrect. The main difference was the failure of MODO Hockey to live up to their potential and AIK performing better that had expected.

Here's the table with my pre-season suggestions in brackets.

It means the playoffs, which start this Wednesday 18 February, with a best of three quarterfinals, will be the following match ups, where the lower placed teams will have home advantage in the first match: