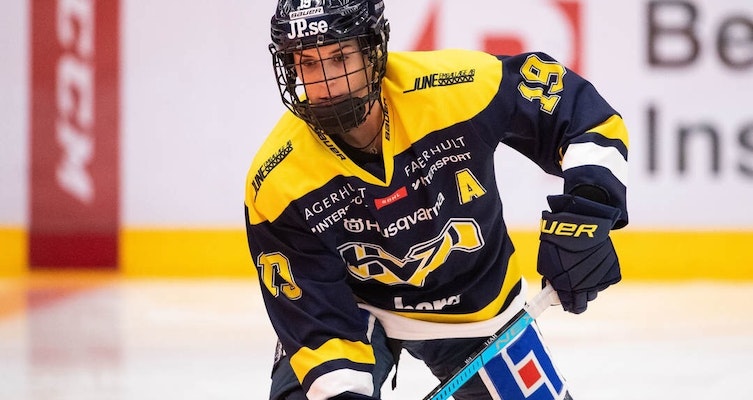 25 year old Canadian, Kaitlyn Tougas, grew up in a hockey family in Thunder Bay, Ontario - a lakeside town which is a similar size to Jönköping where she is playing for HV71 this season.

With her Dad a coach, older brother and sister playing, hockey was natural part of life and she fell in love with the sport and played from as young as just 4 or 5 years old. Whilst enjoying other sports like volleyball, they were just fun activities on the side.

Just six month younger that fellow Thunder Bay inhabitant, Michela Cava, the two of them played youth hockey together as well as being teammates in 2017/8 and 2018/9 at MODO Hockey in northern Sweden.

And it was together with Cava and older sister, Courtney, that Tougas got to take part in one of her career highlights when the Thunder Bay Queens won the 2010 Esso Cup Nationals and Tougas took home MVP of the tournament.

It was always her ambition to gain a hockey scholarship and the drive to make the sport her career took her to the States and four years in the NCAA in the autumn of 2012. In all but her first year at college she topped the scoring for Bemidji State University and was rewarded with a being drafted in the CWHL at #18 by Markham Thunder in 2016.

But after a year in the CWHL she didn't find the success she craved and took the decision to travel to Europe and hook up with Cava at MODO in Sweden.

2018/9 was her breakthrough season in Sweden as the club threatened Luleå's dominance in the SDHL. They finished second in the regular season with Cava winning the Total Points competition and assistant captain, Tougas, herself finishing in 8th with 50 points (20G+30A) in just 36 games.

But it was not to be and for the second year in a row MODO went out in the semifinals against Linköping HC.

So for her third year in Sweden, Tougas decided to swap Örnsköldsvik for Jönköping, whilst Cava and former Bemidji State teammate, Ivana Bilic, opted for Brynäs IF.

"Changing clubs was a decision I made for my own personal growth. I felt that it was time to really commit to a team that was going to have a good shot at winning the gold. HV71 has a great coach and signed a lot of talented players, it felt right to give the south of Sweden a shot", she says about the move, "So far I’m happy with the experience".

Tougas is the top scoring Canadian in the SDHL with 26 points (7G+19A) in 21 games and sits in 7th on Total Points, two points ahead of Cava. And the HV71 team as a whole are crushing the opposition having lost just three games all year, 12 points ahead of second placed Djurgården (at the time of writing). This team is re-writing the rules and raising the standard for the SDHL.

But perhaps more importantly for Tougas, they're in first place and few would bet against the Jönköping team taking their first ever Swedish championship in the women's team's history in the spring.

2019 has been a challenging year for women's hockey both in North America and Sweden. The women's game, "still has many steps to take to be a sustainable career", she says - and she speaks with the experience of playing in three of the top leagues in the world in America, Canada and Sweden.

But right now for the 25 year old Canadian, it's not about talk in the boardroom, but hard work out on the ice - so keep a look out for #19 in the blue and yellow of HV71, otherwise she'll have danced past you on her way to the goal and the first you'll know about it is when the siren rings.

Look on the SDHL's own website if you want to see current footage of Tougas playing for HV71 this season at https://www.sdhl.se/play .

Or if you want to see a bit of older footage check out the You Tube link below to the Bemidji State 2014-5 season review. Tougas wears #9.

You will also see her current HV71 teammate, the American blue liner, Alexis Joyce (#22), who won Rookie of the Year that season and former MODO teammate and defender, Ivana Bilic (#23) playing for the Beavers that year.