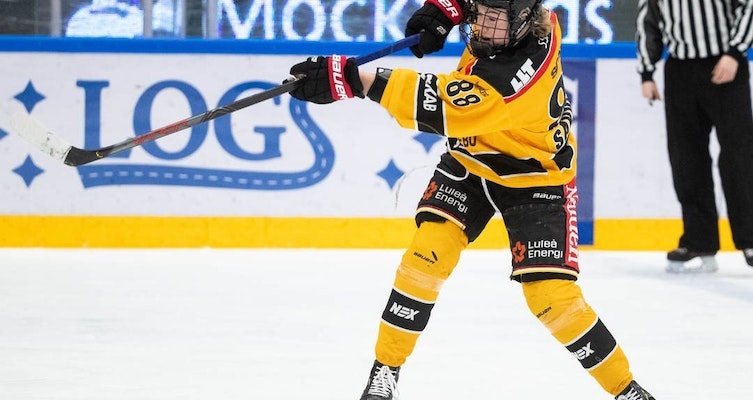 Finnish international back, Ronja Savolainen is in her fourth season at Luleå/ MSSK. She has two Swedish championships, one Finnish championship, two World Championship bronzes and a silver from last year’s World Championship on her CV. It is hard to believe she is only 22 old. Oh, yes, I forgot to her personal career highlight, a Bronze medal in the Pyeongchang Olympics.

And whilst she could have easily got a place to play college hockey in the NCAA, she decided to stay put in Scandinavia, “I didn't want to move that far away from my family,” she says.

But she had also heard good things about Luleå from her Espoo Blues teammate, Noora Tulus. The Finnish international forward had played the end of the season with the Norrbotten club in 2015/6 and when Savolainen talked with manager Fredrik Glader she was hooked, “he told me what the organization is doing with the woman's team, how much they respect us and that its’ professional at Luleå,” and she adds, “I got curious and wanted to see if it was true”.

The club already had Finnish international and top scoring forward Michelle Karvinen in the squad. But Luleå’s Finnish contingent for the 2016/7 season did not just include Karvinen, Tulus and Savolainen, but also the Finnish captain and defender, Jenni Hiirikoski.

Sweden’s former assistant captain and now commentator, Maria Rooth, has called Hiirokoski the best back in the game today. And whilst few would doubt Savolainen’s own talent as a two-ways back, it is clear that she looks up to and has learnt much from her teammate.

I ask the 22-year-old what the best piece of advice she has received from her club and national captain, “that I just should keep going and keep dreaming. And that nothing would come for free”.

Savolainen has taken those words to heart and has shown that hard work pays with a remarkable increase in her scoring this season, with 41 points (20G+21A). That means that her and young compatriot Petra Nieminen now lead the scoring for the Luleå. The 22-year-old is the league’s second highest scoring back, finishes tenth in Total Points and was one point ahead of Hiirikoski.

But the younger protégé is not letting it go to her head, “we both like to have the puck and use our skating,” she says when comparing her playing style with the captain, “but she is so much better in the defensive zone than I am and I'm so jealous!” she adds with a laugh. “I tend to go after the puck in my own zone, but she keeps her player, which is much better,” she says analysing where she wants to improve her play.

After years of clear superiority, Luleå find themselves in the unusual position of being second, behind HV71, who have been the team to beat this year. Savolainen understands that the season did not start well for the Norrbotten club and losing manager Glader did not help.

I ask her how she thinks the team are going to advance in the playoffs, “I and the team need to play better in the D zone,” she says honestly, “and then use our skating, hard work and help each other,” she says listing her team’s top qualities.

Before we finish, I ask the Finn about the forthcoming World Championships in Canada where many are wondering if this can be the first time a European team breaks the North Americans stranglehold on the cup, “I think that we need to have the same good feeling in the team, just never give up and enjoy playing out there. We know we can beat them when we have a good day and play as a team,” she says with determined confidence.

No games in the SDHL playoffs or the World Championships are easy. But Savolainen, and her teammates at Luleå and for the White Lions, have the ability to win. Could this be the year which sees the 22-year-old wearing two Gold medals around her neck before this season is out?