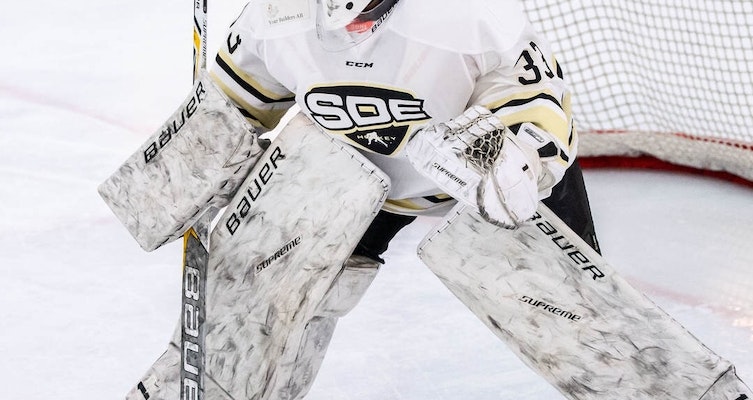 Stockholm’s SDE Hockey are due to finish the regular season with their highest ever position in the league table. One of the reasons for the club’s transformation this year was smart signings in the summer of 2019.

And maybe one woman who has played the crucial role in their success is Canadian netminder, Lindsey Post. She currently heads up the goaltending league with an impressive 94.69 SVS%.

Growing up near Ottawa, Quebec she chose to move west to home town of the Edmonton Oilers, to study at University of Alberta and get the chance to play net in the Canadian USports league.

And in was her final year at college that she got be part of her best career moment so far, “when we won the USports National Championship in double overtime 2-1 against our long-time rival McGill University”, she says with a look of triumph.

After that Post got the chance to play for the only team in Alberta in the CWHL, Calgary Inferno. Her teammates included multiple Olympic and World Championship Gold Medallists Rebecca Johnson and Brianne Jenner of Canada and American, Brianna Decker. So, for two years Post minded net against the world’s elite forwards.

She reflects on her time in Calgary, ”it was definitely a learning experience for me. It was a level up skill wise from University however, you had far less resources and were expected to perform at a higher level”.

But that did not stop the Inferno winning the last ever CWHL trophy in 2018/9, “winning the Clarkson Cup was an amazing experience. The group of girls in that locker room was the most talented players I’ve ever played with and it was great to be a part of it.”

But behind the glamour of the playing with the best, lies hours of hard work both on and off the ice. “Because most of the players on the team had to work, practices were usually at 7 am and then you’d have to find time to go workout at the gym during the day as well”.

The collapse of the CWHL last summer lead to new opportunities for the now 26-year-old, “I knew that I didn’t want was career to be over and was lucky enough to find a place to play here in the SDHL. I knew about SDE because when I played in University my team came and played them in pre-season.”

It was not just Post that could not give up hockey. Four more of that Clarkson Cup winning Calgary team are now playing in the SDHL; Kelly Murray and Kelty Apperson at SDE and sisters Tori and Zoe Hickel at Linköping HC.

For the first time in SDE’s history the club will be in the playoffs in the coming weeks. The 183 cm (6' 0”) Canadian goaltender has a vital role to play and her skill and experience will be needed if the Stockholm club to have a successful postseason.

“I think our team has the ability to upset a couple teams in the playoffs. We’re definitely underdogs, but anything can happen in this series.”