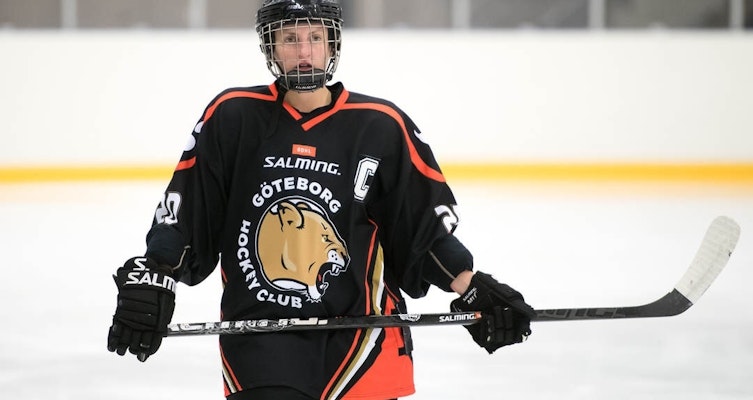 When she came back from the United States aged 22 years old, Anna Borgfeldt thought her hockey career was over.

Three years later, when work took her to Sweden’s second city, she could not help but look up the local club, Gothenburg HC. “I missed being part of a team,” she says, “and I’ve been “stuck” in Angered ever since!” she says with a smile.

Now 26 years old she is playing in her fourth year at the club, three in the top division, the SDHL, where she has also been captain for the west coast team.

The club have had a rough ride in an increasingly competitive SDHL, surviving through winning the qualification to the SDHL against Division 1 teams each year. But Borgfeldt herself has seen year on year improvements and continues to be one of the team’s top scorers.

“This has been the most enjoyable season we have had so far as a team, considering the amount of close games we have played,” the forward says about the club’s performance. It has definitely been one of the best in the club’s SDHL history, even if the final result has not always gone their way.

“Personally, I have believed more in my ability as a player and have had great company around me which has made me a better player on the ice,” she reflects, pointing to how a team can made the individual shine.

She as played for Linköping HC and for Sweden’s international team before her first “retirement” from the sport.

And in 2010 she got to play in the U18 World Championships in Chicago, USA with a team that included Lisa Johansson (AIK) and Michelle Löwenhielm (HV71). She and the team picked up an impressive Bronze medal, whilst a USA team that contained Zoe Hickel (Linköping HC) collected Silver.

Borgfeldt enjoyed her time playing with Quinnipiac in the NCAA, but says she prefers the “broader range of freedom and opportunity for creativity in Sweden”.

The increased number of North Americans in the SDHL over the last few years has meant that she has had the opportunity to play against some of her teammates from college days, like Emma Woods, now at rivals’ Leksand IF, “It was a lot of fun to see Woodsy again, brings back a lot of college memories”.

And whilst some people are critical to the amount of import players in Sweden, I’m in agreement with the former Bronze medallist’s assessment, “It would be fun if more transatlantic players would come to Europe to play once graduated from College”.

Players like Borgfeldt and her Gothenburg teammates play an important part in the SDHL. Many of the best players in the Swedish league, whether Swedish or imports, have learnt their trade in the American college system and then come to Europe to play. A mix of home grown players and imports is the way forward for the women’s game – a formula that has prove successful in the men’s game in Sweden and, of course, in the NHL itself.