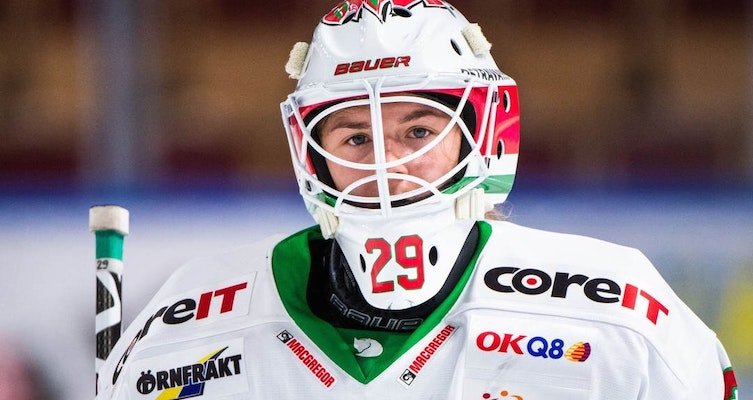 There has been a break in the SDHL to allow for the Euro Hockey Tour to take place in Småland between 5-8 February. Switzerland, Germany, Czech Republic, Russia, Finland and hosts Sweden took part in this tournament. But the Finnish delegation were rightly critical of the poor quality of the facilities, including one arena where the changing rooms were in another building.

But on the ice, there was high drama when Sweden met the Czech Republic. The visitors won on penalties, in part due to a superb performance from MODO Hockey's netminder, Klara Peslarova (pictured). However, Sweden were still able to make it through to the final due to other results.

Finland, as expected, won the tournament beating Sweden in the final, 4-0 with all the goals coming from Luleå/ MSSK players, two from Michelle Karvinen and one each from defenders, Ronja Salvolainen and Jenni Hiirikoski.

The next item on the international calendar is the World Championships, which will take place after the SDHL season has come to a finish. But the Euro Hockey Tours finalists will not meet as they are taking part in two different tournaments.

Finland will be aiming to win the championship which starts on 31 March in Canada. After gaining Silver last year, they are looking to break the glass ceiling and end the North American dominance in the tournament.

Sweden are the only team in the Euro Hockey Tour competition who will not be competing in Canada. Instead, they will be competing in the Division 1A championship which starts in France on 12 April. They are favourites to win, which they must do to return to the top level in 2021. But pressure will be on manager, Ylva Martinsson, to deliver after last year's enormous disappointment of being relegated from the top tier in 2019. That poor result came after the flop at the 2018 Olympics where Damkronorna came seventh out of eight nations.