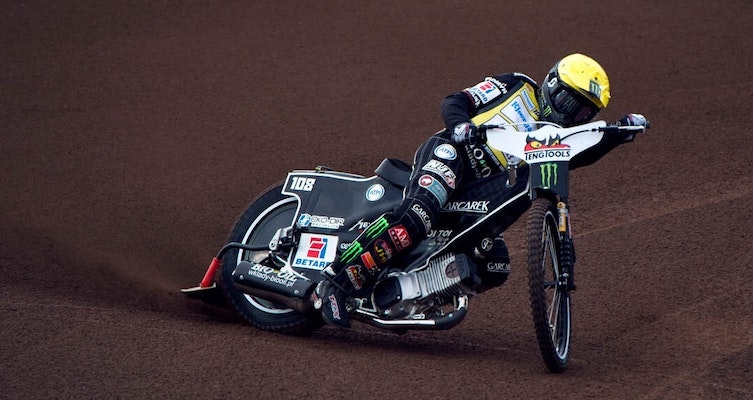 The winners in tonight’s matches will go forward to the semi final next week where they will face either Eskilstuna Smederna or Västervik Speedway.

Both Målilla Dackarna and Hallstvik Rospiggarna went into tonight’s deciding Quarterfinal 2 with a six-point advantage from the first match last week after winning 48:42.

Again, Vetlanda Speedway were without their three Ekstraliga riders, as Gorzow’s Bartosz Zmarzlik and Syzmon Wozniak as well as Lublin’s Dominik Kubera stayed in Poland.

However, Gislaved Lejonen had both Robert Lambert and Jakub Miskowiak back in the side who were fighting to stay in the playoffs away in Målilla.

Unlike Vetlanda, Dackarna lined up with three SGP riders, Tai Woffinden, Maciej Janowski (5+3) and Jason Doyle for the second week in a row against Lejonen. And four Heat wins in a row from Woffinden, Doyle and two from Jacob Thorssell meant the home team were winning 16:8 before Heat 5 had even begun.

To make it worse for Lejonen, their Swedish riders, Oliver Berntzon (3) and Linus Eklöf (0) struggled to get into the match at all. The SGP rider has a problem with his bike and rode through the tapes on his second heat. Then he was thrown out the third heat for a regular Touch the Tapes. His next Heat after that he came last. Eklöf failed to score from his two heats.

By contrast, for the home team everything went smoothly as Woffinden (13, pictured), Thorssell (12+2) and Doyle (12) led the team easily to the semi-final next week.

Rospiggarna’s Timo Lahti (10+1) and Kai Huckenbeck (9+2) won the first heat away at Vetlanda with a 1:5 forcing the home side to chase right from the start. When the home team’s veteran Swede, Peter Ljung (1), stopped dead in turn 3 of Heat 9, you had a feeling that this match was never going to go the home team’s way.

Polish duo, Tomas Gapinski (13) and Runa Holta (10+3) top scored for the home side and won the final heat with a 5:1. But it was too late to beat the Hallstavik team who also had an in-form Kim Nilsson (12) alongside the Finnish and German riders and sailed easily through the next week’s semi-final.