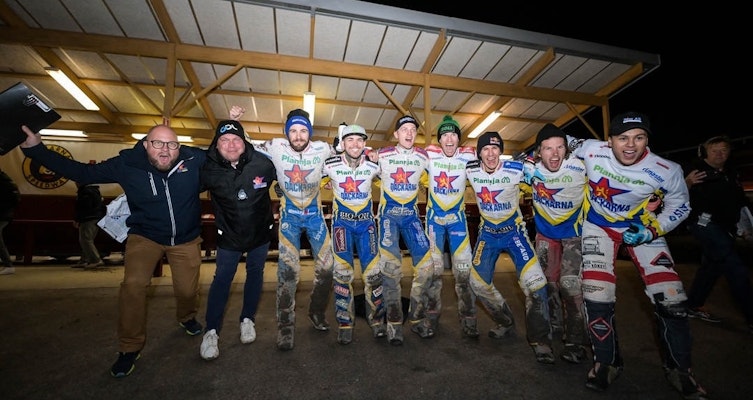 Målilla Dackarna came into tonight’s match with a 16 point advantage and refused to give the host team, Eskilstuna Smederna, a chance to take a fourth title in five years.

So when the visitors’ Tai Woffinden came over the line in first place in Heat 12 with Rasmus Jensen (8) in third place the team could celebrate Dackarna’s first Elitserien title for 14 years. After a poor performance yesterday, the British three times World Champion, came good and top scored for the winners with 12+1. It was Kacper Woryna (11+1) who was the highest scorer for the hosts.

In the last heat, with the match already won, Dackarna's Jason Doyle (11) and Smederna's captain, Michael Jepsen Jensen (10) clashed with both going to ground as they came out of the second bend.

Sharp words were exchanged between the riders and when the mechanics came to collect the bikes they had to be separated to stop there being a dust up. Both team managers quickly appeared on the shale to calm things down. But that didn't stop Jepsen Jensen shouting and waving his arms around wildly in frustration all the way from the corner to the depot. When Doyle finally came off the track, with three or four people around him as makeshift bodyguards, someone in the crowd threw a stick at him starting off another heated "debate". In the end, the Australian was ruled out of the re-run, blamed for taking down the Danish rider.

But, in many ways, that was the only drama of the night as the home side failed to get early 5:1s and put pressure on the visitors. The Målilla side made no mistakes, not even giving the victory to the home side, with the final score 44:46.

That meant it was 81:93 in total as Målilla Dackarna were crowned Bauhaus League champions for 2022.

An enormous crowd of 3261 watched the match in Eskilstuna, more than double the biggest gate from earlier this season.